Portland city officials had a hunch back in 1996, and began pumping money into this far southeast neighborhood.  Finally, what was once considered the “outer realms” of 82nd Ave, has now become the “next big thing” in Portland.  Even Thrillist.com took note and listed Lents as one of “12 Neighborhoods Across America That Are About to Blow Up”.   Lents – Portland’s Next Big Thing!

Lents’ official neighborhood website, ILoveLents.com, defines Lents as “three square miles of East Portland, extending about 12 blocks in either direction from Interstate 205”.  It is confined on the west by 82nd Avenue and extends east to 112th Avenue.  The bulk of the commerce is confined by Powell to the north and Foster to the south.  But, technically, the southern boundary of Lents happens at the Clackamas County line near Mount Scott.

Taking Its Turn in the Portland Resurgence,

After spending close to 100 million in restoration since then, residents and officials are beside themselves, as the city’s aspirations are finally being realized.  No longer dubbed the “Felony Flats,” Lents residents are proud that their long misunderstood community is attracting the growth and commerce that it deserves.  But, a few things had to converge for that to happen.

1.) As part of the Lents Town Center Development Project, the city worked to remove failed businesses and to clear space in the area along 92nd Avenue.  Installation of infrastructure and  improvement of sidewalks now promote pedestrian traffic, which is necessary for a town center.  Portland is notorious for creating a sense of space, so that each neighborhood has a distinct feel and identity.  A quaint and walkable main street increases the livability of an area, and attracts quality residents who invest in their community. 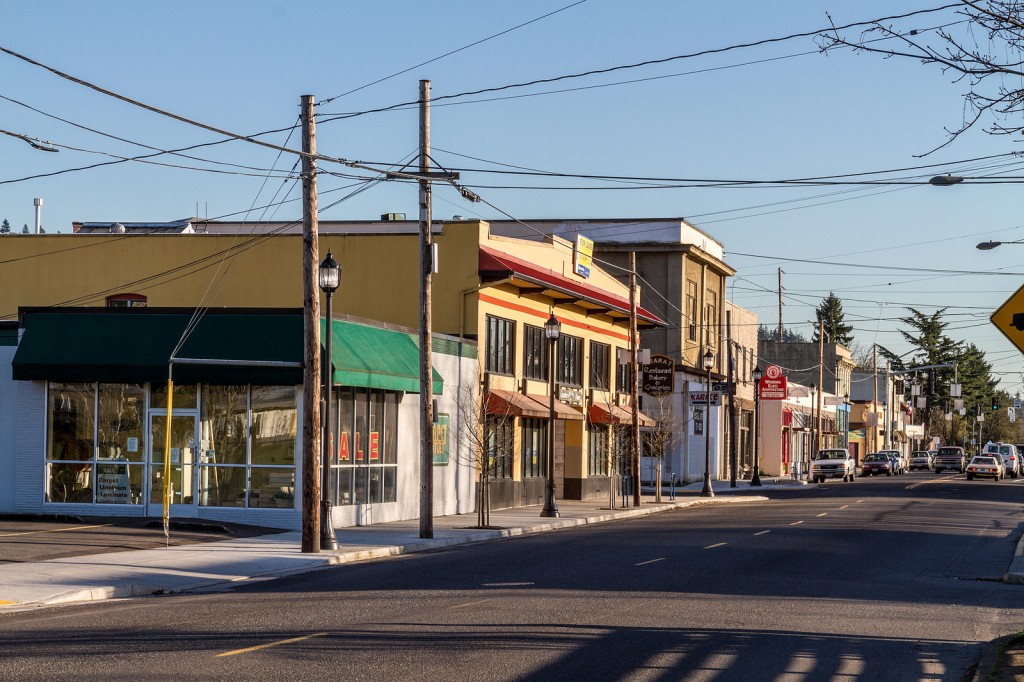 2.) Accessibility improved with the addition of the MAX Green line in 2009, Portland’s light rail.  There are three major stops within walking distance in Lents, on Foster, Holgate, and Powell.  Lents is about a 30-40 minute commute to downtown, and about 15 minutes to the Clackamas Town Center.

3.)  The housing prices in Portland continue to surge.  Prices have inched out first-time home buyers and anyone with a modest income from purchasing a home “close-in”.   Where are buyers heading now? – Lents

4.)  After struggling for years to attract provocative businesses to the area, the city is now experiencing success.  A major developer,  Palindrome, led by Chad Rennaker, has begun scooping up lots and businesses in the area. 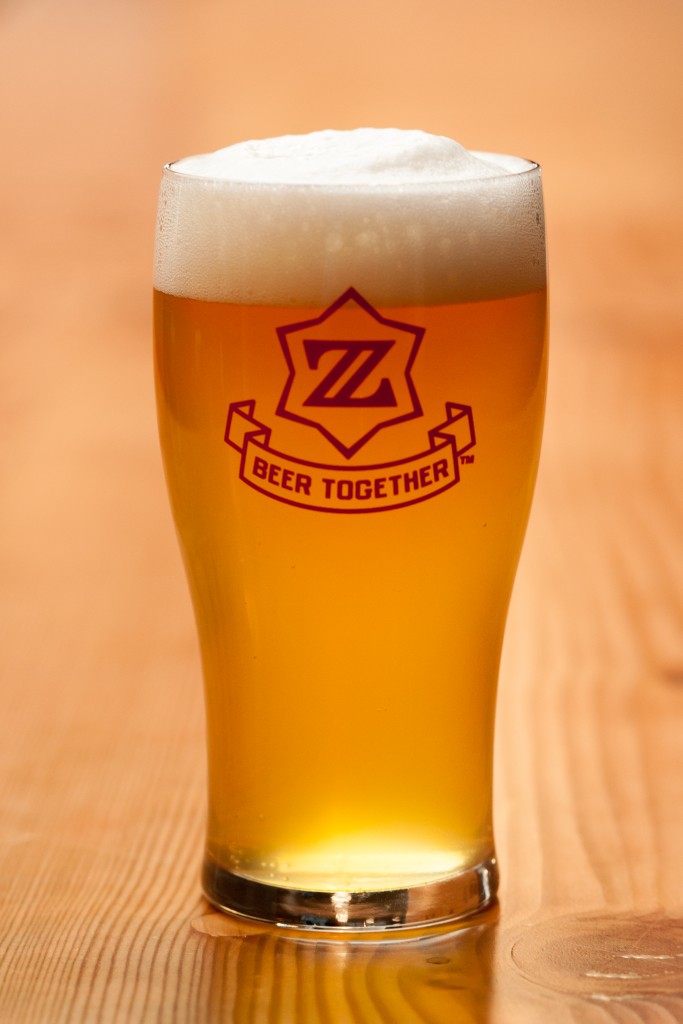 Zhaus Brewing Company has an ample selection of distinctive beers.  The Ramona Red, named after a street in Lents, is one of our favorites.  It’s a Northwest-Style Red Ale with wood, spice, pine and citrus notes that shine against the crips backdrop of a blend of pale carapils, caramel and chocolate malts. Image Courtesy: Kimberli Ransom

Rennaker’s latest development, Zoiglhaus Brewing Company, or more easily spouted, Zhaus, opened their doors this past fall.  And, they were named one of Portland’s best new breweries in 2015.  Zhaus is setting the tone for Lent’s fledgling town center, and is already successful in acting as an anchor tenant to attract other investors to the area. 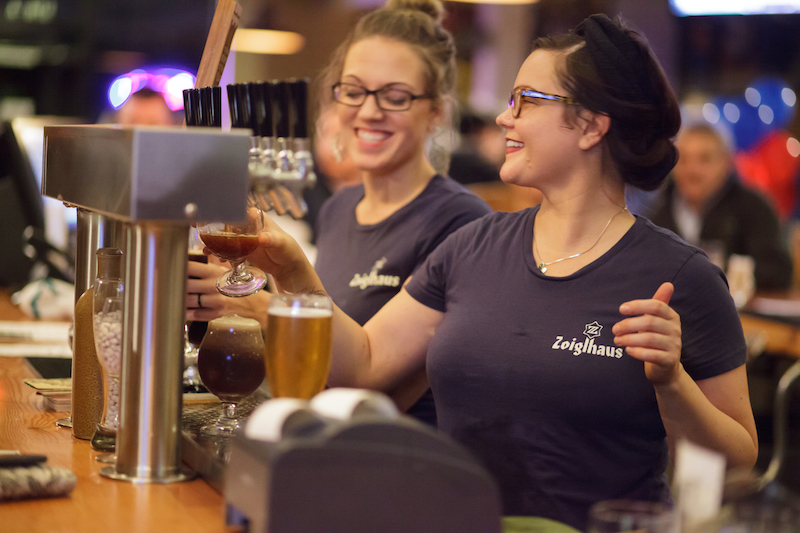 In his own words, Rennaker said of the brewpub, “that creates the spark that hopefully leads to other development.”

To the city’s delight, Rennaker has also secured a deal to purchase the site where the New Copper Penny currently sits.  This is a large site that sits at 92nd and Foster, and has the capability to act as another alluring anchor tenant.  Residents and officials long felt that this restaurant and nightclub, who had historically made waves in the area, was a stalemate in Lents’ revitalization efforts.  Residents would like to see a neighborhood grocer coming into the area, but that remains to be seen.

Rennaker has also discussed his vision for a covered public plaza that would house the Lents International Farmers Market, and would act as a multimedia performance venue that would include a screen to show outdoor movies.  The plaza would fill the void between Zhaus and the Harold Street Apartments.  One thing is for certain; Lents now has the momentum it needs!

What Do the Residents Say About Lents?

“It’s one of the most misunderstood and undervalued neighborhoods in Portland,”  Tammie Ellis, Lents resident and local Realtor said.  She shares her story below:

“In 2005, we sold our PDX home in FOPO (Foster Powell), before it was FOPO. We wanted to take some time off from home ownership to travel; so, we rented. Unfortunately, life got in the way of travel, and I was diagnosed with breast cancer. This inspired us to change our life. We wanted to live in a home that we could manage with one income, if necessary, and it had to have a real yard. We wanted the ability to sit under a shade tree, plant a little garden, sit around a fire-pit, entertain family and friends, and most of all have a real DRIVEWAY and a place for friends to park when visiting. By the time we got ready to buy again in 2007, the housing market was crazy. We couldn’t find a livable home for under 300K west of 82nd Ave. Then we decided to venture out east of 82nd. Through a series of luck, persistence, creative looking and some much needed help and guidance from our Realtor, Kelly Stafford, we bought our current home for under 200K. In 2013, I was diagnosed again with breast cancer, and I cannot imagine not having my back yard (see photo attached) to heal under the shade of my apple tree.” 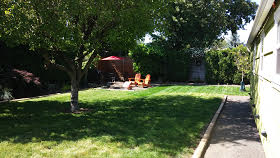 We love living in Lents, and are excited about the rest of Portland soon discovering how great life can be in Lents.”  – Tammie Ellis

“The Crossroads of the East”…..

As Portland grew, and the urban sprawl slowly headed east, lot sizes became less congested, and city life began to mix with the rustic periphery.  Lents now offers some of the largest lots in the city.  It boasts easy access to outdoor recreation, while offering all the metropolitan amenities of downtown via the MAX and I-205.  Plenty of shopping and big box stores, like Fred Meyer and Walmart mix with an eclectic assortment of international restaurants along 82nd Ave to the west.  Further past, the delightful and delicious buzz of Division Street is still close enough to easily experience on a Friday evening.  Favorites within Lents are Eagle Eye Tavern, El Pato Feliz, and Oliver’s Cafe.  All of these conveniences, and still incredible nature parks like Powell Butte and Kelly Butte are almost in your backyard!

Get Outdoors in Lents:

Lents Park – Offering an awesome 38 acres, and featuring a dog park, sports fields, gardens, walking paths, a playground, plenty of open spaces and picnic tables; this park is a favorite in Lents.  COMING SOON!: The Portland Pickles are the new amateur baseball team set to start playing this June, 2016.  To watch a game at Lents Park, pick up tickets here: http://www.portlandpicklesbaseball.com/

Ed Benedict Park  – A sport friendly park with basketball courts and a skate park, walking paths, a playground, and public art.  The Portland Memory Garden is located in the Southeast corner, and is a unique space designed for people with memory problems, such as Alzheimer’s disease.

Zenger Farm – a working urban farm that models, promotes and educates about sustainable food systems, environmental stewardship, community development and access to good food for all.

Leslie Knope would be proud – The Springwater Corridor 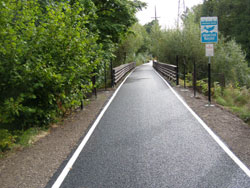 The Springwater Corridor is the crowning jewel for parks and recreation in Lents.  Crossing along the Johnson Creek, this nearly 21-mile long paved path is excellent of hikers and bikers. Nature-lovers cross through wetlands, buttes, and pastures as the trail leads from one park to another. The corridor is part of a larger 40-mile loop that connects Lents with Milwaukie, Sellwood, and Downtown Portland, and back over to the east toward Powellhurst-Gilbert, Gresham and Boring.

The I-205 Multi-Use Path is another fantastic advantage to Lents.  The path runs along the I-205 freeway for 16.5 miles from NE Marine Drive in Portland to SE 82nd Drive in Gladstone.

Lents has a population of 20,000 people, encompasses 3 sq. miles, and is one of the most ethnically diverse in Portland.  It possesses a nice mix of residential neighborhoods and commercial businesses.

Check out Lents at one of their ANNUAL EVENTS:

Movies In The Park: Free and fun for the whole family! Lents Park features outdoor screenings in the summer months.

Fun On Foster:  Nearby neighborhood, Foster/Powell hosts this street fair.

Sunday Parkways: Happening throughout the entire city in the summer months, the City of Portland closes streets to cars, making way for bikers of all ages and walkers to enjoy our neighborhoods.

For more information about Lents neighborhood, available properties, or to list your home, please contact Home Sweet Home Realty via email at info@hshrealty.net or by phone at (503) 515-2986.

What is your home worth?

Find out with a free, informal comparative market analysis of your property from Kelly Stafford.